This Invention Will Weigh You Before And After Pooping. Glory Hallelujah!

"I was 10 pounds lighter after dropping that deuce. Literally."

Have you ever received a SnapChat of the massive shit your extremely proud friend just took?

I have, and let me tell you: That is not a pleasant picture to view while you're eating breakfast. If you're like me, you'd never do something as vile as sending your pal a pic of the hearty loaf you just laid. But if you're like a whole lot of people out there (supposedly girls do this just as frequently as guys), you've probably sent a poop pic at one time or another. People just love gloating over their shitting achievements.

Now, there's an invention that'll let you share your pooping prowess with your buddies without getting too graphic. It's a toilet seat scale that weighs you before and after dropping the kids off at the pool. That way, you can give your friend an exact measurement of the weight you lost without needing to actually show them the unholy brown monster excreted from your intestines. Plus, the toilet seat scale will allow you and your friends to compare your dumps, adding a whole new level of exciting competitiveness to bathroom time.

The toilet seat scale is not in production yet, but we hope it will be soon.

The toilet seat scale was dreamed up by designer Haikun Deng. 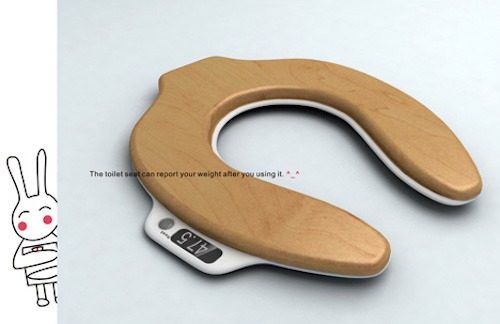 While the idea for a toilet seat scale originally dates all the way back to 1922, Deng's design incorporates a digital scale for weighing accuracy. Yeah, it'll be hard to get an accurate weight reading while sitting down on a toilet, but hopefully the digital scale will get as close as possible.

Of course, a lot of people who buy the product when it (hopefully) comes out will probably do so for its novelty rather than accuracy. And, anyway, the most crucial metric here is your weight pre- and post-poop, which is what you really want the scale for, anyway.

Deng says she came up with the idea for this particular toilet seat "to help weight-obsessed women feel better."

According to AdWeek, Deng's original idea was for a product to help "women grappling with self-image problems." Presumably, Deng thought that women (but apparently not men) who are having weight-related self-esteem issues would benefit greatly from seeing the weight literally shed off every time they go number two. I mean, it doesn't seem like a terribly well-thought-out idea, but at least Deng's heart was in the right place. I guess.

I assume people know that pooping will cause you to weigh less only until you fill up the tank again, but maybe some people really could improve their self-esteem through taking enormous shits.

While the product is being marketed as a self-esteem improvement tool for women, we all know what it will really be used for. 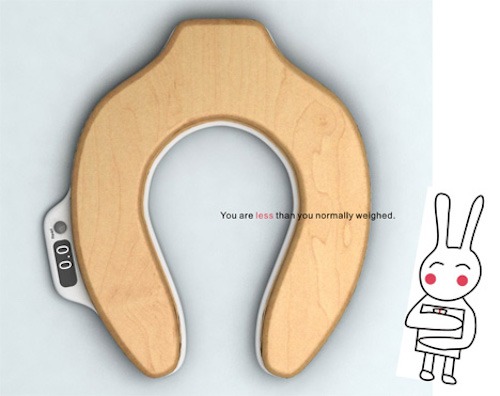 That's right, everyone is just going to use it as a new way to brag. "Bro, I dropped a 2-pounder yesterday." "Pfft, that's nothing. Last week, 3.8 pounds literally dropped out of my ass." It'll be a whole new way to find competitiveness where none need be. I'm surprised this didn't catch on decades ago in America.

There's no word yet if/when the toilet seat scale will go into production, but let's hope it's here by Thanksgiving so people can be shocked by how much five pounds of turkey and gravy still weighs after it's been digested.