11 Of The Juiciest Moments From The 2016 MTV Movie Awards

Nothing compares to Alexander Skarsgard presenting an award without his pants on.

1. Ryan Reynolds thanks Blake Lively and jokes about sex in his acceptance speech for Best Comedic Performance

"I'm really glad Amy Schumer didn't win, that would be really weird with those dances," Ryan told the audience. "I have been trying to get 'Deadpool' made for over a decade and I failed and it's you the fans that got this made. The reason I'm standing up here is because of you guys, and we had a blast working on this movie, but it wasn't all unicorns and cocaine. I want to thank my wife, Blake. Everything I do is to make her laugh. Especially the sex."

Good to know Ry is a hoot and a holler in bed!

2. Charlize Theron dedicates her win for Best Female Performance to "all the Furiosas out there"

"The story of Fury Road is, in part, a story of the power of women and the power to create our own destinies," Charlize said. "So, tonight I accept this award on behalf of my own little Furiosa my daughter, August Simone and on behalf of all the Furiosas out there. You are the true warriors."

3. Alexander Skarsgard goes pantsless to present Best Movie Award with Samuel L. Jackson and it's hard to look away 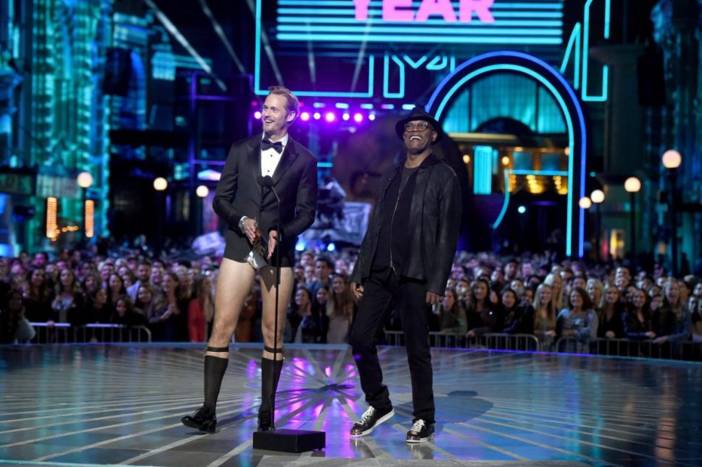 We've seen most of Alexander Skarsgard in "True Blood," and now that he's going to be king of the jungle in "The Legend of Tarzan," it only makes sense that he must get into character.

"Me, Tarzan," Alexander said while taking the stage in his tighty whities. "I was going to go shirtless but someone told me Zac Efron did that two years ago. It's just as sexy but a little bit classier and dare I say, a little more sophisticated. No offense, Mr. Efron."

Can he just go pantsless all the time?

4. Melissa McCarthy crowdsurfs to accept the Comedic Genius Award, and becomes the first female ever to win the award

There was no one more deserving of this award than the talented Melissa McCarthy. Between movies like "Bridesmaids" and "Spy," she's proven that she just knows how to make us all laugh.

Being the amazing human she is, she honored all of the funny women who inspired her. "I may be the first woman to receive this award, but I am certainly not the first one to deserve it," the "Gilmore Girls" alum said. "I'm a walking human patchwork of all the funny women I have loved and studied over the years." She went on to name Lucille Ball, Julia Louis Dreyfus, Whoopi Goldberg and more.

Winning the award for Best Kiss for "Pitch Perfect 2," Adam DeVine and Rebel Wilson gave us a little reminder of why they were worthy of the win by reenacting their kiss...which resulted in making out on the stage floor and Rebel flashing the audience.

Halsey took the stage to perform her hit "Castle," which was featured in the film, "The Huntsman: Winter's War." Stepping out on stage in a white cape and cut -ut body suit, she delivered an incredible performance as fake snow fell from the sky.

The summer flick seriously looks awesome — Cara Delevingne, Will Smith, Margot Robbie and Jared Leto introduced the new clip in which Harley Quinn and The Joker show that supervillains make for one entertaining movie... especially when they're as funny and badass as these two.

8. "Fantastic Beasts and Where To Find Them" debuts new trailer

As soon as the "Harry Potter" music started playing, it was hard not to get excited about this film. In the new trailer for the first film of the trilogy, we learn more about the American Wizarding World. Newt Scamander arrives in New York and smuggles in a creature with magical powers, and now we can't wait to find out more.

With an awesome introduction from Gigi Hadid and Kendall Jenner about female power, Ari took the stage looking like an absolute goddess. Clad in pink satin and a feather boa, she embraces a classic Marilyn Monroe's look while belting out "Dangerous Woman," accompanied by Broadway composer Jason Robert on piano.

10. Kevin Hart and Dwayne Johnson rap about Leo in "The Revenant"

Whether you've seen "The Revenant" or not, by now you know that Leonardo DiCaprio gets fucked by a bear. Kevin Hart and Dwayne Johnson broke out in a random rap where they sing all about it to remind us of that very disturbing scene...

11. The Lonely Island sings a medley of classic Will Smith songs

This is everything you wanted in your life and more, trust us... Akiva Schaffer, Andy Samberg, and Jorma Taccone dancing around while singing Will Smith songs, including "Parents Just Don't Understand" from "The Fresh Prince of Bel-Air" will make you nostalgic for the 90s/early 2000s.

Also, congrats to Will Smith for winning the Generation Award!