The Cleveland Museum of Natural History probably doesn't sound like the most intriguing place on the planet. First off, it's in Cleveland, so that already puts it pretty far down the list, but then you work in the thought of visiting a museum, and it doesn't necessarily sound invigorating to most of the general population who aren't nature and/or history buffs. Well, those who work in the insect collection department or area or whatever, decided they should entice patrons with a bit of comedy.

Cars Nature History Animals Germany Humor Non-Premium
Without giving too much away, ever heard of one of these?

Obviously this is the Volkswagen Beetle, or sometimes known as the Bug. Well, you can most likely see where this is going, so there's no need to bug you with the suspense (or the puns) any longer.

See what they did there? A Beetle among beetles. A Bug among bugs.  A car among insects. Well, the latter doesn't really work, but here's what they've slid in for those with a close eye on things to get a little chuckle as they pass through. 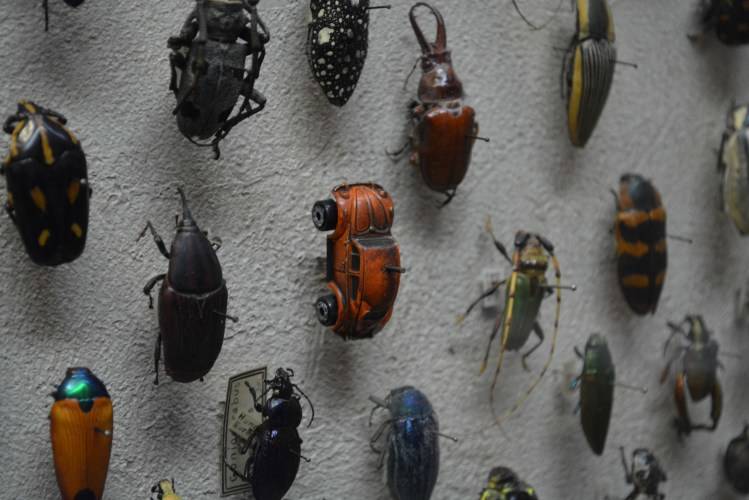 The people of Reddit were quick to point out just how punny these employees of the Cleveland Natural History Museum, specifically who just might be on staff.

It goes without saying that dads are the master of puns, and this quick joke most likely kills among the fatherly segment. However, it doesn't necessarily mean a bunch of dads are behind all this, although the evidence seems pretty clear. it could mean something else, because the only way a non-dad would laugh at this, is with a little assistance.

The assistance I'm referring to? Well, actually what Drama_Derp is referring to is a little drugs.

So, what do you think? Are a bunch of dads sitting around chuckling over this while exchanging photos of their kids, or was this whole bug-sized prank masterminded by some bored, yet high as hell stoners? Guess you'll have to book a ticket to Cleveland to know for sure, but that probably isn't worth it.