10 Fun Facts Behind The Scenes Of 'Jumanji'

Jumanji came out in 1995 and fascinated audiences everywhere. It's a harrowing fictional plot that takes a boy Allan Parrish and traps him inside a board game for 26 years until new people decide to pick up the dice and continue the game. When he escapes, chaos ensues at every turn. Well, that's a gross understatement and summary of the iconic plot, but the point is, this film has stood the test of time as a cinematic classic.

For fans of Robin Williams, this was one of his finest performances.

Movies Celebrities nostalgia Board Games Comedy Movies Drama Movies Non-Premium
1. Robin Williams likens the disconnect between Allan Parrish and his father to that of his own father and grandfather 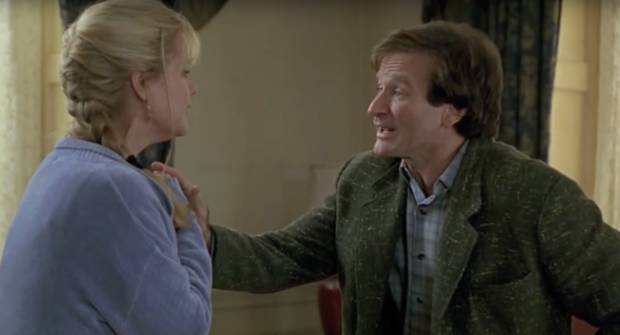 Robin Williams explained, "[Williams' grandfather] had been very wealthy and when [he] died, they lost all of that and [Williams' father] was forced to work at a strip mine in Pennsylvania." That is why Williams felt his father allowed him to follow his own dreams, because of what his father had to give up in his life.

2. Peter Shepherd, well the actor who played him, was also the voice of the Teacup in "Beauty and the Beast" 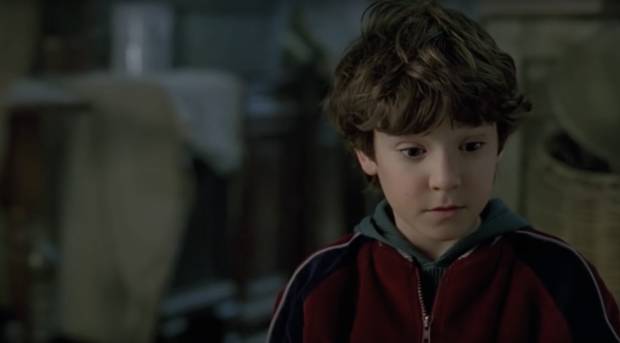 He continues to do active voice work to this day, and even had a role in the The LEGO Movie video game. Seems he's made quite a career for himself, which is no easy feat for a child actor to pull off.

3. You can still find the Parrish Shoes sign in Keene, New Hampshire 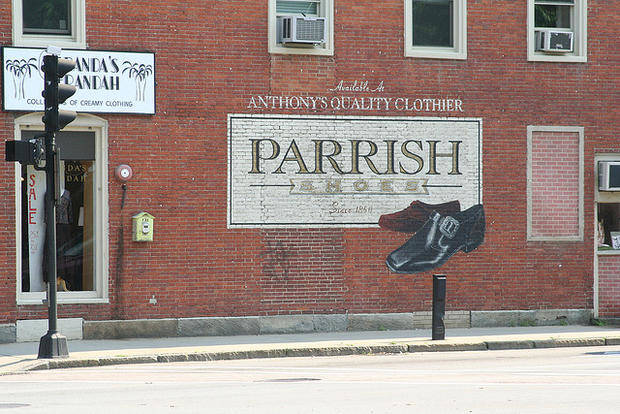 When Williams tragically passed away, the town gathered for a makeshift memorial in his honor and even screened the film. "We thought it might be a good idea for us to do something good for the community in response, not only to commemorate Robin Williams because he was so impressive, but also because a little bit of our city is in the movie," explained Tim Horgan, The Colonial Theatre’s director of audience services.

It was truly a loss felt round the world, but we have this to remember him by.

4. Obviously, Robin Williams comedic brilliance would shine through while on set

Kirsten Dunst explained to the Chicago Tribune in 1995:

"He would crack us up all the time on the set. I learned a lot about improv from him. My favorite impression he did was Nell (the Jodie Foster character) going through a drive-through."

"When you walk on a set with Robin, it's like you're at a barbecue in his backyard. He really is a joy."

That seems like the most incredible experience: working with Williams, and enjoying free comedic burst between takes.

5. Van Allsburg's boredom with normal board games is what lead to the creation of Jumanji 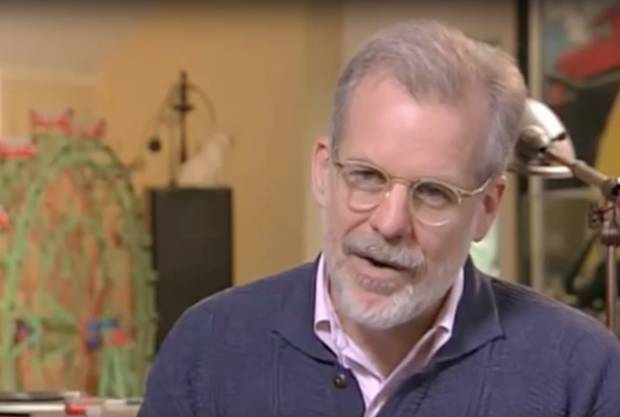 He explained growing up how the concept behind games like Monopoly were exciting, but in the end, when he would win, all he would be left with is fake money. So, he wrote Jumanji as a way to see, "if there were such a thing as a game board where whenever you landed on a square and it said something was going to happen, then it would really happen."

6. Being an only-child helped Robin Williams connect with the character of Allan Parrish 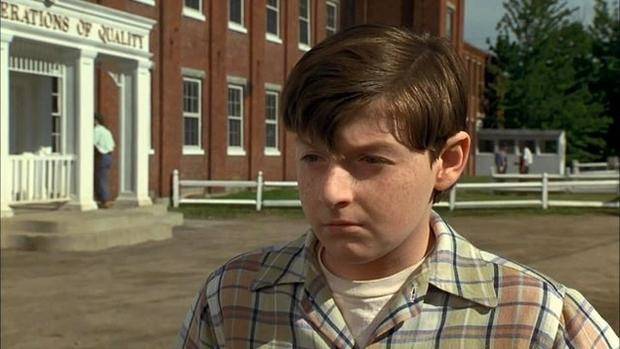 Williams explains in a 1995 interview with the Christian Science Monitor:

"I play a boy who has been swallowed up in the game. By the time he is able to come out, 26 years later, his parents are dead, and he feels lost and alone. That's something I can understand. As an only child, I had no siblings to play with, and my parents worked hard, and we moved around a lot."

7. Scarlett Johansson tried out for the part of Judy Shepherd, and as you know: didn't get it

In the clip above, you can see an 11-year-old Johansson put in her lines for her audition, but the part ultimately went to Kirsten Dunst. Seems they've both done well since either way, but how different might things have been if they'd chosen otherwise. 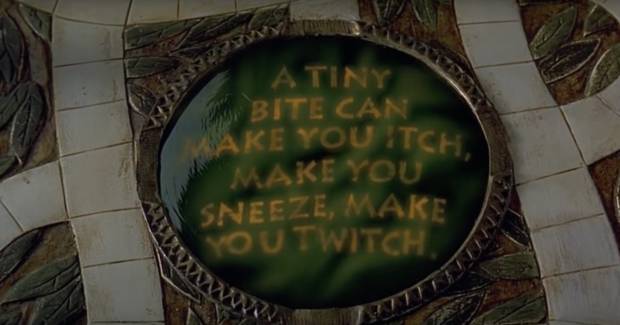 He says it means "many effects" in Zulu, but that's obviously a farce when you realize what he does to people who ask. In an interview with Entertainment Weekly he said, "I tell them it’s an island in the Caribbean. Book your travel there early."

9. The film is based off the premise of a 1981 picture book by Chris Van Allsburg, who didn't like the first draft of the film, mind you 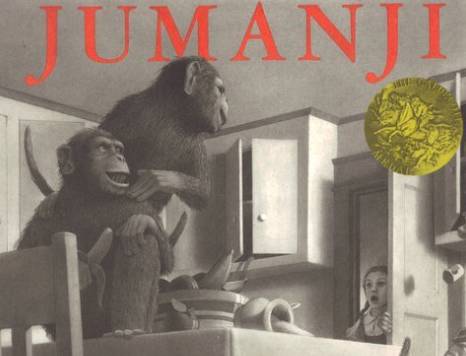 He explained to the Philadelphia Inquirer:

"The premise [of] the book, and which is of value to the film story, is that there's anarchy and chaos and something uncontrollable inside an environment that we associate with control, which is the house. It's this surreal contrast of two things that don't go together: the quiet domesticity of a large and carefully tended house, and the utter chaos that shudders through it."

He luckily made contributions to a later draft.

10. If you couldn't tell, Allan Parrish's father and Hunter Van Pelt are both portrayed by Johnathan Hyde 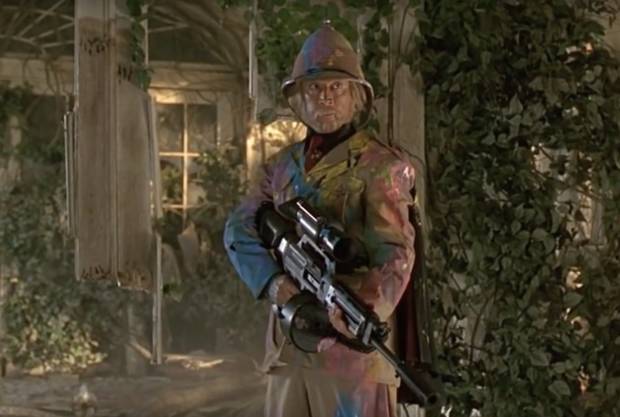 Director Joe Johnston may have (read: most certainly was) playing with the symbolism of Allan Parrish having to overcome both oppressive men. Hence, that is why they look alike, and Allan must battle them rigorously throughout. If you refer back to #2, this may have had some serious metaphorical effects on Williams, as it may have been something he could also relate back to his family upbringing.